As promised, I am back to finally talk about the fifth book in the Peter Grant series. I finished it late Tuesday, as I expected I would. And you know what? I think it was my favorite so far. 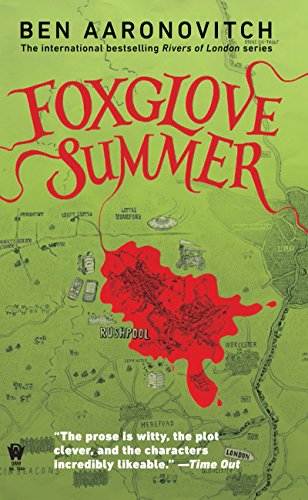 Peter has lived his entire life within the hustle and bustle of London. From his parents’ flat in Kentish Town, to the Folly, and all the police nicks in between, London is his home. So when Nightingale assigns him to an apparently Falcon-free (read: perfectly normal) case of two missing children in Herefordshire he’s reasonably nervous.

What is someone like him going to do in the country?

Turns out, an awful lot. Because, of course, there’s more to this case than two disappeared eleven year olds.

Rushpool is a tiny village surrounded by ancient woods, bisected by an old Roman road. It’s idyllic, quaint, and chock-a-block full of small town minds. But while he’s acting as an assistant to the Family Liaison Officer, Peter does a bit of digging of his own a discovers a trend. Eleven year old girls have a history of vanishing during the summer, on nights of the full moon only to reappear a day or two later. They also have shockingly similar tales of invisible friends. Invisible Unicorn friends, that have a taste for mutton.

Rushpool also has a healthy UFO sighting population, so who knows what’s real and what isn’t?

But, it’s Peter’s job to find out, and to find the girls. Lucky for him, he’s not alone. Beverly Brook is in town, supposedly for her own River business, but she tags along to help find the children. And there’s Officer Dominic Croft, the country boy that can’t stand the country. He was particularly enjoyable and I hope he comes back in future books!

So, why was this my favorite book so far? Well, the stakes are high, what with the two girls missing. Lesley is still AWOL, but she’s texting Peter and Nightingale is being very mysterious about his activities while he’s away. I feel like there was more going on in the background of this book than in previous installments.

And, Ben Aaronovitch managed to take my childhood fantasy and make it a nightmare. There’s a chase scene involving a carnivorous unicorn that is downright terrifying. I stopped afterward and had to take break. I laughed, because I really like unicorn lore and whatnot, so getting wigged out by a unicorn is just not something I expected from this series.

And more of the Fae make an appearance, with Peter getting himself into all kinds of trouble, as he always does.

This book reminded me of the BBC show Broadchurch a little bit. Big city copper comes to a small town and divulges secrets long thought buried. Except this is much funnier and there’s magic!

I’m getting really close to the end of the series that’s been published so far. Which makes me nervous. I’m not looking forward to finding another series all over again. But this one is just too good not to inhale.

I finished reading The Furthest Station tonight, so I’ll be around next week to talk about that. And of course I’ll be in tomorrow to discuss this weeks goals.