I just wanted to stop by and share something pretty incredible with you.

So, remember when I said I was reading and writing a ton of fanfiction? Well, that trend continued through the month of April. I’m pretty sure I just wrote more words in a month than I ever have before.

As of 4/30/17, I wrote a total of 31,113 words. Of fanfiction. Jesus Christ. That is a TON of writing, the most I’ve ever done in so short a time. I’m simultaneously impressed and disgusted/disappointed. Why haven’t I pumped out so many words for my own original content?

Granted, fanfic is “easier” since there’s very little world-building or slogging through early character development. That’s mostly done by the time you get your hands on the content.  I mean, you should still have those things, but the amount of discovering and fleshing out are considerably less. Which is the vast majority of work I’ve been doing on From the Quorum.

So, in a way, this has been a nice exercise. One that  I have no plans of stopping anytime soon. I’ve got another 3 chapters (at least) to write for this particular story, a oneshot (i.e. short story) outlined, and then another full fic planned after that.

But, if I can keep up this pace, that means I should be able to fall back into my own original works once Mass Effect lets me go. Right? That’s what I’m telling myself, anyways.

Saturday was the release party for the third issue of The Audient Void, and it was awesome. There is some really great fiction and poetry in this issue, and the artwork is fantastic as always. The event coincided with Independent Bookstore Day, which meant there were a lot of people there who might not have attended otherwise, and there were snacks and extra special merchandise on hand.

Oh! There was also a cool marionette show, with an original play by Adam Bolivar, that was really quite entertaining! 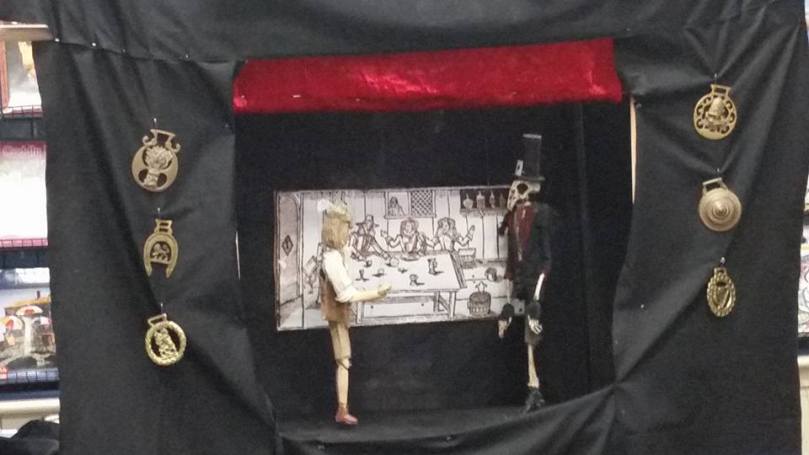 But, my favorite part of the event (aside from the customary after party) was that I thought up a new story while I was there. Just a short story, and I won’t go into details about it here, but I hope to write it this year and submit it to the A.V.

We’ll see where I’m at in a few months. If I’m still writing at the pace I am now, I have no doubt I’ll get everything done that I set out to this year, even with this detour. Remember, I planned to fall off the face of the Earth for about two months after  Andromeda came out, so I’m still on schedule.

Anyway, just wanted to share with you all that I am a writing machine these days, even if it’s just fanfic.