I wasn’t able to finish reading Skyward before the book was due back to the library. The thing about Sanderson books is that they’re very popular, and holds abound. And if there are holds, you can’t renew. So, instead of accruing fines on a book I intended to buy anyway, I just went and bought the dumb thing. Which, it turns out, was a sound decision.

So, here’s the thing. I’ve been slowing down on my mad dash of consuming Sanderson content lately. I don’t know. I think that last signing I went to (for Oathbringer) really turned me off to his books, through no fault of his own. There’s just such a cultish fervor surrounding Sanderson and his books, and I am definitely guilty of such behavior. So, I took a step back. I still haven’t read Oathbringer. And I wasn’t even all that excited to read Skyward.

That is, until I actually got a few pages into it. 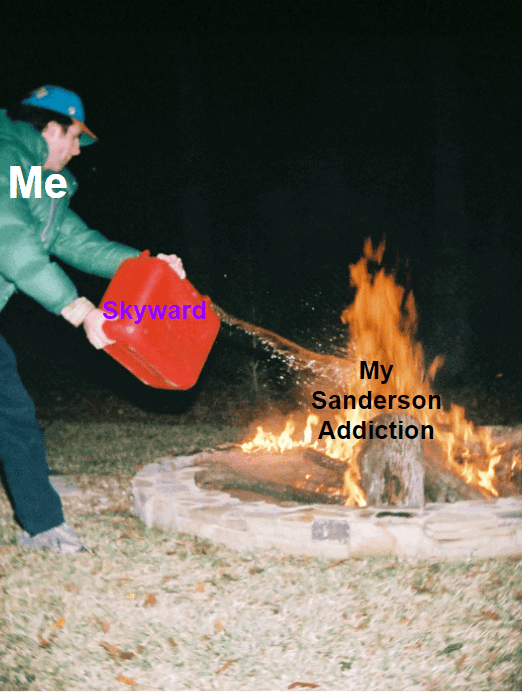 This book reminded me why so many readers love Brandon’s books. Why I love Brandon’s books. It’s full of amazing characters, hilarious dialogue, and a plot that absolutely held me captive. I loved Spensa and the world she lives in, which I should have expected; Sanderson does world-building better than just about anybody else in the genre right now.

Spensa is the sixteen year old girl who just passed her pilot’s exam. But it doesn’t matter, because the Defiant Defense Force has zero interest in letting her fly. You see, Spensa, aka Spin, is the daughter of the DDF’s only coward. Her father abandoned his Flight during the Battle of Alta, and was subsequently shot down for his cowardice. Spensa has trained and studied her whole life to get into the DDF and prove them wrong about her dad, but Admiral Ironsides won’t give her the chance. They sabotaged Spensa’s test, and suggested she take a job elsewhere.

That is, until Captain Cobb, callsign: Mongrel, accepts Spensa into his classroom. It’s her one chance at redemption and she refuses to let it pass her by, no matter how difficult the Admiral makes her life.

Spensa is allowed to take her Flight class, and nothing else. She can’t join her Flight in the mess hall, she can’t bunk in the academy, and she can’t use the learning resources beyond her classroom. So, she lives in a cave she found by chance, sleeping in the cockpit of a crashed ancient starfighter.

In her spare time, because why not, she repairs the ship in hopes that she’ll be able to fly it when she graduates, since Ironsides is unlikely to let her fly no matter how well she does in her training. And, naturally, she’s out to find out the truth about her father, and what really happened that day at the Battle of Alta.

I’m not going to go into more details from here, because it would be spoiler-y and I really don’t want to ruin this book for anyone. There were quite a few zigs and zags that I didn’t anticipate and really enjoyed. I would prefer to preserve those for readers.

Know that this book did make me tear up a couple of times, and made me cheer out loud at least twice. My husband laughed at me as I read the last fifty or so pages on the couch, because I was yelling at the book quite a bit. In true Sanderson fashion, things do not end how I thought they would.

Thank goodness this is the first of a planned four book series, with the next book set to release in Fall 2019. I do not want to wait long to spend more time with Spensa and her Flight, callsign: Skyward.

I’m still reading Lies Sleeping. I’m having difficulty adjusting to my utter lack of free time lately. That and Red Dead Redemption 2 and a renewed fervor for all things Dragon Age is really putting a damper on my reading. But, it’s less than 300 pages and due back on Tuesday.

I’ll get it done.