My brain is all melty from the 16+ hours I worked on editing The Steel Armada over the last two days. It was a wild time, where each chapter got about two hours worth of work, including three separate read throughs. I added a total of 68 words to the manuscript, and that’s after counting all the stuff I cut.

My brain is pudding dribbling out of one ear right about now.

So, let’s talk about Bloodlist! 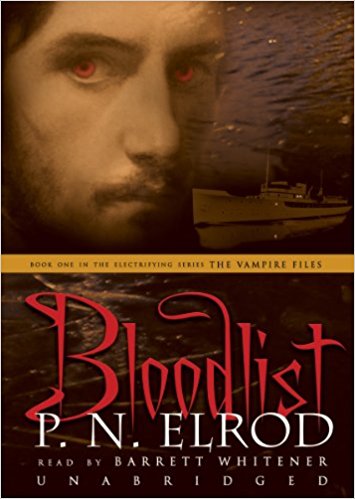 You’re probably looking at that rating and cringing. You’re used to my other three star reviews, which are usually pretty negative. I’m not one to give a low rating lightly, and giving anything under a four usually brings me physical pain.

But, I’m not angry at this book. I’m not upset or even all that disappointed. I listened to it. It was interesting enough to ensure I kept coming back to it, although I didn’t think the narration was anything mind blowing. It’s hard to compete with James Marsters though, let’s be honest.

So, why the low rating then? Because I have no strong feelings about this book. I am neither disappointed by it nor would I recommend it. I read it. It wasn’t bad. It wasn’t necessarily good either. It just was.

The book is set in post-Prohibition Chicago, and the lead character has just become a vampire. It has a lot of noir storytelling elements, which I appreciated, but it also featured a lot of mobsters being the 1930s equivalent of dudebros.

The man character, whose name literally just escaped me for two whole minutes, Jack Fleming was all right, but I didn’t really root for him. I liked the side character, his Private Investigator buddy… Escott? Yeah, that guy. He was intriguing.

But, there was little to no explanation of what the rules of Elrod’s brand of Vampirism were. I mean, I think Jack didn’t really know and we’re learning along with him, but… still. It was a little boring. It took awhile to get going and actually get to the plot. Which is a really common problem with the first book in a series.

I would say Bloodlist definitely suffers from that. My Goodreads rating said, “I feel neither glad to have read it, nor upset that I took the time.” I think about this book and my reaction is… *shrug*.

That being said, I’m open to giving the second book a try, if I ever find myself with a lull in my audiobooks. It wasn’t bad it just wasn’t good either. I do wonder if I would have liked it more reading a hard copy. Sometimes the audiobook leaves something to be desired.

However, I did enjoy listening to it when that migraine struck. Always gotta have a audiobook queued up, just in case.

I just went to read the synopsis for the second book in this series, and it really didn’t pique my interest either. Maybe someday, when I’m real bored, I’ll come back to it. But for now I’m going to stick to the Peter Grant books.

I am glad I gave this series a shot though! You never know what you might like if you don’t give new books a try!

I don’t think I’ll be back again this weekend. I’m going to take some quality time to decompress from my editing marathon and just enjoy my time off with a good book. I’ll be back to talk at you all on Monday!