I’m writing through a migraine, albeit a mild one, but bear with me.

I first met Hap and Leonard, Lansdale’s protagonists, in the novella Bent Twig, which is featured in Rogues Anthology, edited by George R.R. Martin and Gardner Dozois. Maybe not the best place to meet characters, but it was a hilarious romp through the American South.

I enjoyed the tale so much that I immediately added Savage Season, the first Hap and Leonard book, to my TBR list on Goodreads. 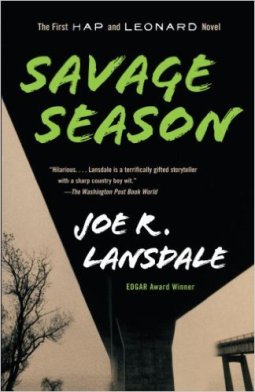 I have to say that I wasn’t as impressed with this first installment. It was appealing for it’s short length (under 200 pages), but it was still sort of slow. Once the action picked up it was really good though.

I chalk this lull up to the fact that a lot of the book is spent introducing the characters and affirming their relationships to one another. That’s to be expected from a first book in a series, but I already knew the two characters who really mattered, so it was a bit slow.

That being said, I did enjoy this book, and still plan on reading the next one. Eventually. It seems that the books may be fairly episodic, which is perfect. I’ve got a lot of lingering series that are demanding my attention, and I really want to catch up on them. Once that’s done, I can read more Lansdale stories as the urge strikes me. 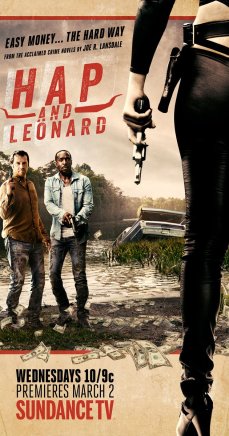 Also, it turns out that Hap and Leonard have become a television series, which aired for the first time in March of this year and has since been renewed for a second season. Huh, I sure have a funny habit of getting into things right as they become popular, without even knowing it. I’ll have to add it to my list of things to watch.

Anyway, I gave it four stars on Goodreads, mainly because it deserved more than just three. It is funny and entertaining, but it’s very straightforward. Few surprises lurked in the pages, and the real highlights are Leonard’s biting and angry lines and Hap’s reactions to them.

Overall, Savage Season is a solid start to a crime/mystery series. I’ll definitely read more of them, but I don’t feel any pressing need to do so.

I finished The Martian over the weekend, and can’t wait to talk about it with all of you. I’ll also be watching the film adaptation for the first time this week, so expect a compare and contrast feel to the book review.

Next for the car audio is Coraline by Neil Gaiman. I’ve also taken up listening to digital audio while doing household chores, so for that I’ve got Elric of Melniboné by Michael Moorcock cued up. So far it’s good, but weird. We’ll have to see how it turns out.

And of course, I’m still working my way through The Obelisk Gate. I’m just over halfway through, so early next week should have it completed.

The Audient Void has accepted all its submissions for issue #2, and the stories are trickling in for editing. Otherwise I’m working on getting Since the Fire into a solid third draft, and writing chapter 8 of Jordinn’s Story.

Those are the goals for this week, at least, that’s what my whiteboard tells me. And while I’m trying to reestablish a routine, the whiteboard is king.

Also, beyond this, I’m in the process of revitalizing the book club. I’ve got all the new members added, so now it’s just a matter of solidifying when we want to me and getting the book lists in.

I guess I’ve filled in all my free time pretty quickly. Getting right back to all those things I’ve been dying to do for two years. Thanks for staying with me through those dark ages. I look forward to talking to you all much more frequently.

Talk at you soon!