As promised, I’m here to tell you all about this amazing book! 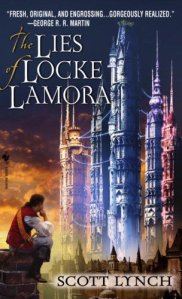 Let me start by warning you of the usual spoiler-ific nature of my book reviews, and that this book contains the most eloquent use of vulgarity I’ve read in recent memory. If f-bombs offend you, you might want to move on.

I wrote about 1,025 words of this post before I realized I simply can’t give you a play-by-play of this book. There’s too much. Too many details that seemed insignificant, that were actually crucial. Too much laughter when a character dropped an incredibly well-timed “fuck”. Too many moments that had me cringing and writhing with the tension and nerves. Too much heartbreak, when beloved characters found themselves beyond saving.

Stephen Lynch did something amazing in this book. He took a pretty straightforward Conman’s tale, and added layer upon layer, until he built a living, pulsing world. Detail by detail, he piled on the bricks until Camorr breathed. From it’s shrouded history, to it’s religion and politics. And not just the the politics of the Duchy and the nobility, but the intricate dynamics of a thriving, thieving underbelly. 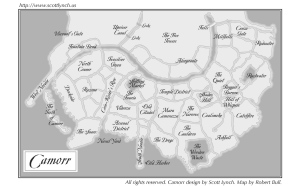 And, while he developed the city, he also brought his characters to life.

I’ll admit that I was a bit lost at first. The learning curve is pretty steep for the first novel in a series. But, I stuck it out those first 40-ish pages and things began to make sense. Lynch tells Locke’s story via alternating timelines. For every chapter in the present, there’s an Interlude that shows us an important scene/event from Locke’s childhood. These Interludes perform the double duty of developing characters and giving the reader subtle doses of information that, though seemingly unimportant, turn out to be crucial to the main events of the story.

And so we meet and come to love Locke Lamora and his Gentlemen Bastards, Jean Tannen, the twins Calo and Galdo Sanza, and the apprentice Bug. They’re an incredibly tight knit band of thieves, far more like family than a gang. They tease each other endlessly, they help each other, and they care for one another as brothers.

Which makes the happenings of this story all the more powerful.

Fair warning, this book gets pretty dark, really fast. What starts as a fun ride with Camorr’s most infamous thief, The Thorn of Camorr, becomes a whirlwind of torture, death, and revenge. Like blood circling the drain.

But, plot alone doesn’t make this book the marvel it is. Lynch is a powerful storyteller. The prose is often elegant. I would even say it’s on par with Patrick Rothfuss’s, and some lines seemed more powerful to me. Where Rothfuss delivers whimsy and magic, Lynch deals out grit and eloquent grime.

Add in The Gentlemen Bastards’ penchant for inventive curses and you have a book that is impossible to put down.

I’m still not entirely sure how he did it, but Lynch had me more emotionally invested in these characters than I have been in a while. Even with Rawn’s Dragon Prince series, though I love those characters, I love them from a spectator’s point of view. I watch the happenings of their lives. In Rothfuss’s series, though I love Kvothe and his friends, and am definitely emotionally invested, I can see Kvothe’s folly. I watch him make decisions I don’t agree with, and it puts a distance between us.

I guess we just see things the same way. Which means Lynch is a brilliant writer, because there’s no freaking way I have the same perspective on life as a late 20s, male con artist in a renaissance-era metropolis. 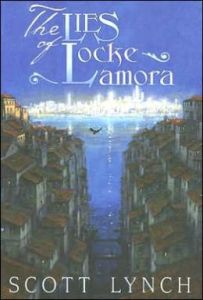 Also, without truly spoiling anything, I want to say that this story builds up to one of the most intense endings I’ve read in a while. It’s at once completely satisfying and heartbreaking. And it’s led into by some intense action, from death defying leaps that had me nauseous, to torture scenes that made me feel the same.

I do want to say here that, though graphic and highly uncomfortable to read, I didn’t come away feeling as if any of the deaths or torturing were written solely to be gratuitous. Everything is shown or included to further the story. I very much think Lynch knew exactly what he was doing when he wrote the darker scenes. He knew what emotions he wanted to evoke in the reader, and he did a damn fine job of it.

High-octane is a cliché I’d use for the last 150 pages of this book. Which is why I keep glancing at the sequel sitting beside me with such longing. I have to read it. I can think of little else, even as I read Purple and Black.

So, if you like con/heist stories, if you like political and religious intrigue, if you’re a fan of a well-placed “motherfucker”, you’re wasting your time reading anything other than The Lies of Locke Lamora.

I’ll see you tomorrow, with a Book Review of Purple and Black, Blogland!

p.s. There’s a ton of fantastic Locke Lamora fanart out there, by the way. I was truly amazed by some of the great doodles and large-scale renderings I found while searching for images. If you’ve read the book, you really should Google it.